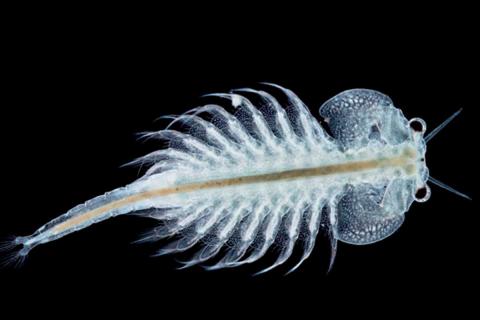 They fell out of the sky and landed on the pale blue planet with a splash. Many of the crew missed the whole thing. Deep inside the spacecraft, arranged in neat stacks, were rows and rows of sleeping astronauts. Each was curled up inside their own pod, where they could have stayed for 10,000 years.

These were no ordinary space travellers. In the following weeks, they burst from their shells and developed into full-blown aquatic monsters: they are salmon-pink, with three eyes and eleven pairs of thrashing legs.

This really happened. The year was 1972 and the slumbering passengers were brine shrimp, otherwise known as "sea monkeys", returning from the Apollo 16 moon mission. They had been taken into space to test the impacts of cosmic radiation on astronauts.

You can safely dry them out, set them on fire, dissolve them in alcohol, deprive them of oxygen, zap them with ultraviolet light, boil them at 105 °C or chill them to temperatures approaching absolute zero: the point at which atoms stop moving. They can also survive extremes of pH that would dissolve human flesh, water that is 50% salt, or a bath of insecticides. They are happy in the vacuum of space or at the crushing pressures found under 6,000 metres (20,000 feet) of ocean.

We are now starting to understand how they do it.