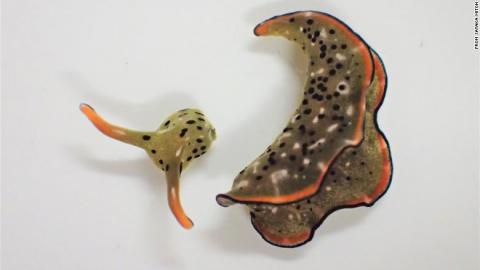 It turns out getting beheaded doesn't mean automatic death for every animal.

Researchers discovered that two species of sea slugs, Elysia cf. marginata and Elysia atroviridis, can regrow their body after cutting off their own head, according to a study published Monday in Current Biology.

Some animals like these sacoglossan slugs, also known as sap-sucking sea slugs, can autotomize, which is when an animal sheds a body part voluntarily, said study author Sayaka Mitoh, doctoral student in the department of biological sciences at Nara Women's University in Japan.

She said the research team couldn't determine why the slugs shed vital body parts, but some animals do it to remove internal parasites that inhibit their reproduction, Mitoh said.

Five of the 15 laboratory-bred young Elysia cf. marginata slugs started to self-decapitate about 226 to 336 days after they hatched. They began feeding on algae within a few hours after losing their body parts and began to regenerate their heart within seven days. After 20 days, the slugs had regenerated their entire body.