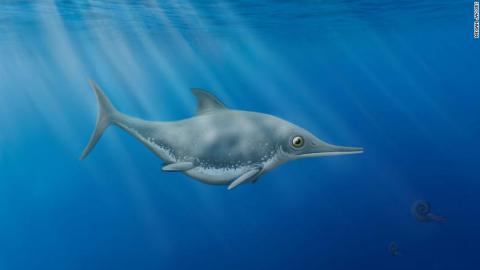 A British fossil hunter has found a previously unidentified "sea dragon" on the southern English coast.

Steve Etches unearthed the well-preserved ichthyosaur fossil in limestone on the Jurassic Coast in Dorset. He thought the fossil was so unusual that he gave it to experts at the University of Portsmouth, southern England, to study.

Megan Jacobs, a researcher at the University of Portsmouth and a PhD student at Baylor University, Texas, who has spent years working on ichthyosaurs, identified it as a new genus and species.

The two-meter long ichthyosaurus, which lived 150 million years ago, has been named the "Etches sea dragon" (Thalassodraco etchesi).