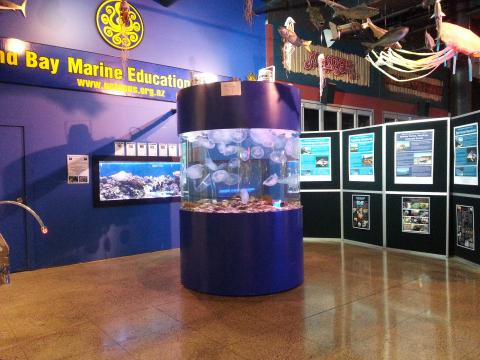 If you haven't been to see our display at the Reading Cinema complex in Courtenay Central recently, you have to visit to see our fantastic new jellyfish display.  We were able to collect several Moon Jellyfish from Chaffer's Marina, Wellington Harbour in early February.  Since then, we've learned to care for these beautiful creatures and they've been the star attraction at the Cinema.

If you get a chance, come down to see how graceful and mesmerising they can be as they float like space ships around the circular tank that was originally designed for them.

Below are some really cool facts about Moon Jellyfish, especially their fascinating life cycle.  Before we go into interesting jellyfish facts, we need to go over the jellyfish life cycle. In the below facts, I will be referencing certain phrases like medusa and polyps, and it’s important for you to understand this process to know what I’m actually talking about.

Check out the diagram below, to help fully understand the life cycle of a jellyfish.

Size: A moon jelly can range in size from 2 to 15 inches in diameter

Appearance: An adult moon jelly is commonly identified by the appearance of 4 horseshoe shaped reproductive organs which are visible through their clear bell. The reproductive organs of the animal are located near the bottom of the stomach so when the jelly feeds the area around the gonads will take on the colour of the prey. Moon jellies have small tentacles lining the bell and distinctive oral arms, which assist in feeding, draping from the centre of the bell.

Habitat: Jellies are found in water with temperatures ranging from 48ْ -66ْ F (but can with stand water temperatures between 21ْ - 88ْ F).   These amazing invertebrates can
even live in brackish water (a mixture of fresh and salt water); however, the bell will take on a flattened appearance when in areas of low salt concentrations.

Prey: The moon jelly is a carnivorous animal which preys on small plankton such as larval crabs, shrimps and fish eggs. Although movement is mostly dictated by the currents, a moon jelly can move into areas abundant with prey by pulsing their bell. Although prey may be stung by the stinging cells (nematocysts) that line the tentacle, most become entangled in the mucous layer which covers the animal. Food is then moved along eight canals which deposit food into the stomach.

Life Span: Moon jelly adults may live for more than a year in an aquarium while the polyp can live up to 25 years.

Mating Behaviours: There are both male and female moon jellies. The male will release a strand of sperm which the female will take internally through the mouth for fertilisation.  The fertilised eggs undergo development in pockets in the arms that surround the mouth until they are ready to be released. Once released, the larvae spend a short period free-swimming before settling in one spot as a polyp.  The polyp will reproduce asexually by creating clones of it which will bud off the polyp and be released into the water column. These released clones look like small plates with multiple arms and will mature and develop a complete bell after approximately 3 months. Once mature, these jellies will reproduce sexually and the cycle will continue.

Conservation Status: The moon jelly population is stable and these animals are typically found in large numbers.

Threats: There are currently no threats to the moon jelly population.

Fun Facts:
Although some jellies produce a sting that may be fatal, the sting of a moon jelly is extremely mild and it not considered dangerous to humans.
Moon jellies may also be referred to the saucer or common jelly.
Marine scientists no longer referred to these animals as jellyfish and instead use the term jelly.
In 1991, over 2000 moon jellies were sent into space on the space shuttle Columbia to study the effects of weightlessness on the development of jellies. Did you know that a group of jellies is called a smack?