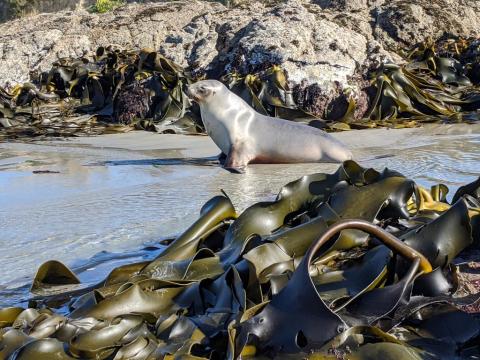 Waving fronds of seaweed form a peaceful underwater scene, with dappled sunlight pouring down. Hidden in the organisms’ genes, however, may be evidence of the planet’s past geological violence.

In a paper published last week in the journal Proceedings of the Royal Society B, researchers say that the genes of bull kelp along the shore of the South Island of New Zealand bear marks of an earthquake that occurred 800 years ago, when part of the ocean floor rose upward and wiped out its inhabitants.

That made way for newcomers of a different genetic background, the ancestors of today’s kelp. The finding suggests that moments of cataclysmic change in an environment can be revealed by comparing genes across populations of some organisms.

New Zealand lies atop a nest of fault lines. After a quake four years ago, the edge of a fault near the town of Kaikoura shot more than six feet out of the water, and Jon Waters, a professor of zoology at University of Otago, and his colleagues began to wonder what happened to kelps after such destruction.

Those stranded above the high tide line die swiftly, but as the ecosystem below the water shifts into a new normal, there’s suddenly a lot of free real estate, where new individuals can sweep in and take over. And because of the way that a population of kelp carpets an area for the long term and makes little room for new arrivals, Dr. Waters said, the algae provided an ideal test bed for seeing whether a disaster’s effects on the gene pool persist over time.