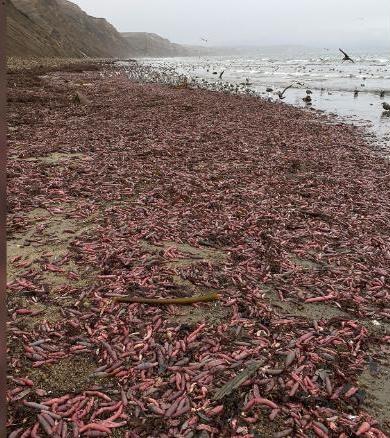 A horde of large, fat worms descended upon a central California beach, spooked out of their burrows by a bomb cyclone.

Wildlife enthusiast David Ford captured the foreboding scene, which looks as though a plane full of frankfurters flung open the hatch and let the dogs rain down upon the unassuming shore.

What were these alien creatures, and why'd they end up on shore?

Ford sent his quandary and the surreal images of the Drakes Beach shore to Bay Nature magazine, a local science publication.

They are not franks but fat innkeeper worms, almost as old as the wet sand in which they burrow. And their appearance was rare: The stranding Ford stumbled into might've been one of the few times they'd ever left the ground in their adult lives, biologist Ivan Parr told CNN.

The bulbous worms can live their entire lives underground, holed up in u-shaped burrows beneath the wet sand along the California coast.

Colloquially known as "penis fish" among biologists and dilettantes for its phallic shape, the innkeeper worm earned their proper name for temporarily housing smaller creatures in their burrows, with little conflict.

There's no need for fat innkeeper worms to come up to the surface, where otters, gulls and humans (they're a salty, South Korean delicacy) could prey on them, when they can cast a mucousy net to catch food and reproduce from the comfort of their burrows.

That's unless, of course, a storm strikes.

"We're seeing the risk of building your home out of sand," Parr wrote in Bay Nature. "Strong storms -- especially during El Niño years -- are perfectly capable of laying siege to the intertidal zone, breaking apart the sediment, and leaving their contents stranded on the shore."

The powerful storms that hit Drakes Beach around Thanksgiving dumped an inch of rain and wind gusts of 45 miles an hour on the area, likely a driver of the worm's surfacing, Parr told CNN.

The other two previous mass strandings in 2010 and 2016 hit during El Niño weather events, characterized by warmer-than-average waters that routinely bring with them more rain to California.Pea crabs, clams and the tiny arrow goby fish share space with the worm and eat the food it discards, though there's little in it for the worm.