New Worm Species From the Abyss 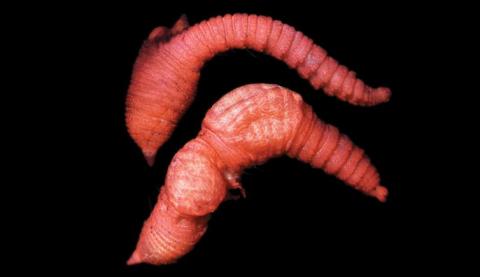 It was once thought that very little could survive in the dark depths of the oceans. But the more researchers look, the more they realise that this seemingly inhospitable environment is actually teeming with life.

In a new paper, scientists from the Museum have described 12 new species of marine worm from the depths of Pacific Ocean. This is expected to be the first of many new species, as they suspect there may be hundreds more waiting to be identified.

This kind of research is vital, as these regions are soon likely to be targeted for deep sea mining.

The deep sea is defined as any part of the ocean that is deeper than 1,000 metres, and it is vast. Thought to cover some 60% of the Earth's surface, it is the largest single environment on the planet.

While this environment contains rocky mounts, canyons and hydrothermal vents, the majority is made up of the endless, muddy abyssal plains.

With no light, frigid temperatures and little food making it from the surface thousands of metres above, it has long been thought that these plains were effectively lifeless. Now research is showing us that this is far from the case.