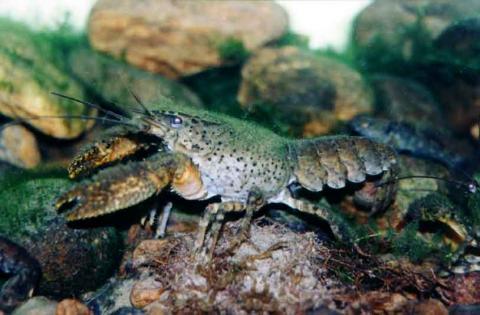 We were very lucky when one of our supporters brought us two Koura, or freshwater crayfish last week.  Koura are true crayfish that live only in  freshwater rivers and lakes.  Like their cousins, spiny lobsters that we call "crayfish", they have a hard shell-like skin.

Freahwater crayfish and spiny lobsters belong to one of the large group of animals, the arthropods, so-called because their legs and bodies are protected by a jointed hard but flexible body covering.

This covering eventually gets too small for the growing animal. It then splits and is left behind, while the new skin underneath hardens. This is called moulting.

There are two species of koura found only in New Zealand. In the east and south of the South Island and on Stewart Island they are larger (about 80mm long) and have very hairy pincers.

But koura in the North Island and in Marlborough, Nelson and the West Coast of the South Island are slightly smaller (about 70mm long) and have less hairy pincers.

It lives in fresh water such as streams, lakes and ponds, and even in swamps. Koura shelter between stones on gravelly bottoms but they can burrow into muddy bottoms, and will burrow well down into swamps that dry out over summer, to wait until the water returns.