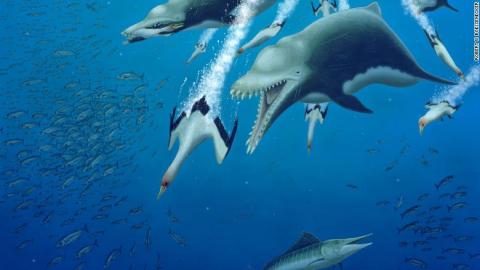 Dolphins may seem cute and friendly, but the largest member of the dolphin family is actually none other than the ultimate hunter of the sea — the killer whale, also known as an orca.

Now researchers have confirmed that an ancient dolphin that lived during the Oligocene Epoch — 33.9 million to 23 million years ago — was the first cetacean (a type of mammal) using echolocation to navigate underwater and fill the role of apex predator, much like the current-day killer whale.

Echolocation allows dolphins to "see" through sound underwater. They do so by emitting calls to locate distant objects in the water, then interpret the echoes of sound waves that bounce off of those objects.

The skeleton helps to fill the gaps in the evolutionary narrative of these marine mammals who returned to the sea.

Its 15-foot-long body size, a shorter and stronger snout, tooth wear and vertebral formation indicated that Ankylorhiza was the first Odontocete predator that could eat both small- and large-bodied prey and swim faster than other whales. This indicates for the first time that it was one of the few extinct cetaceans to fulfill an ecological position similar to that of killer whales.