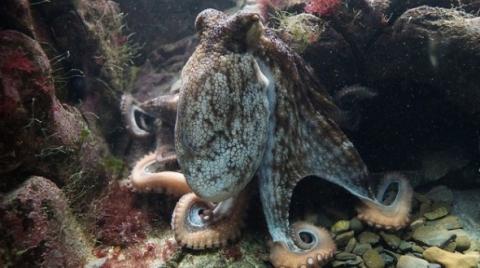 Octopuses are aliens — or, at least, so vastly different in their genetic makeup that they might as well be considered out of this world. Scientists recently sequenced the first genome in the Octopus Genome Project, a huge undertaking to map out the entire DNA structure of the complex cephalopod. What they found was simply incredible.

Researchers at the University of Chicago took on this project and chose the California two-spot octopus for their subject. Then, they learned that a group at the Okinawa Institute of Science and Technology in Japan was working to break down the genome as well. So the two combined forces, and together, unlocked many of the mysteries surrounding the octopus. The results were recently published in the science journal, Nature.

Octopuses have 33,000 genes, roughly 10,000 more than a human. This alone sets it apart from any other invertebrate in the world. They are also uncannily clever, with the ability to open jars, solve puzzles, and even use tools. It’s no wonder that some might think this creature is from another planet. In uncovering the sequence, scientists found that octopuses have a similar set of genes to those found in humans, that make up a neural network in their brains, which accounts for their quick ability to adapt and learn. We also share a large brain, closed circulatory system, and eyes with an iris, retina, and lens. All of these independently developed in another species vastly different from our own mammal origins.

Another focus of the study was looking at the octopus’ ability to camouflage itself in the blink of an eye. Now, with the sequence coded out, researchers can study exactly how the octopus can change its skin within milliseconds. If unraveled, this could lead to major breakthroughs both in neuroscience and engineering, in terms of creating garments and structures that could have instant camouflage ability.

A huge discovery was the ability of the octopus to improve on its own genetic code. This is common in humans and other animals, but the ability at which the octopus can edit its own RNA is pretty wild — they are able to adapt their nerves in order to withstand the extreme cold of the deep ocean. The scientists also took a long look at the genes that make up the octopus’ suckers. It was discovered that part of the sucker function allowed for the animal to taste, in addition to catching its dinner.

There’s still a lot to uncover from this project. Scientists have only just begun the process of breaking down the genome. The map is laid out now, and it will be only a matter of time until researchers chart the unknown territory of the octopus.