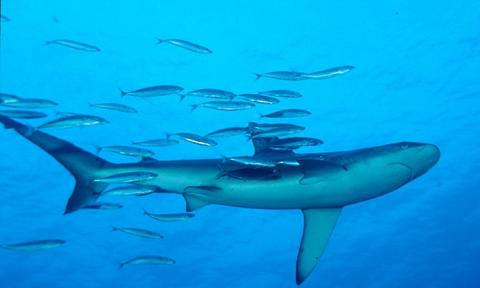 Deep in the ocean, there is a profound space between what science can explain and what's left to our imaginations. To fill in the gap, humans have spent centuries spinning tales of hundred-food, tentacled monsters, fierce enough to capsize boats and fend off sharks.

Now, for the first time, scientists have evidence of a large cephalopod tangling with a shark. The shark survived, though not unscathed. This finding was published in June in the Journal of Fish Biology.

Before November 2019, study co-author Deron Verbeck had never seen anything like the “white dots” he would later notice on an oceanic whitetip shark.

He was shooting photos off the coast of Kona, Hawaii when he spotted the strange markings. Verbeck, an underwater photographer whose unique style involves only shooting in ambient light while holding his breath, was "perplexed by the seemingly purposeful placement of them," he tells Inverse.

Once he got home and looked over his photos, he noticed that those white dots were evident in the last photo he'd taken that day. A closer look suggested they were sucker marks.

The photo is the first evidence of marks from a cephalopod on a shark. Subsequently, a team of scientists used Verbeck's photos from the past decade to inform the new finding.

"Verbeck has spent probably more time in the water with those sharks, off of Kona, than anybody else," the study's lead author Yannis Papastamatiou tells Inverse. "He has seen so many that I think he knows it when he sees something different."

Papastamatiou, an assistant professor at Florida International University, studies predator ecology in locations around the world — near Mexico, French Polynesia, and Belize. This is the first time he's seen these kinds of markings on a shark.

Based on the size of the tentacle marks, Papastamatiou and his colleagues think that the cephalopod that left the marks was at least 1.5 meters long — not including its tentacles. There are a few families of larger cephalopods living near Hawaii that could have been the culprit.

One of them is the giant squid.