The blobfish was discovered in 2003 by marine ecologist Kerryn Parkinson while on ocean expedition off New Zealand.

The peculiar species, also known as smooth-head blobfish, is a deep-sea marine creature that lives off the southeastern coast of mainland Australia, as well as the waters of Tasmania and New Zealand.

The Anatomy of the Blobfish

These animals have different anatomy compared to other fish. For example, they don't have a swim bladder, which allows them to control buoyancy. If blobfish had these gas-filled sacs, they would implode.

These marine animals don't have a full skeleton or muscles, and the stomach is inside their body.Their bodies are made up of a blobby substance with a density that is slightly lower than water, allowing them to float above the seafloor.

Unlike many other fish species, blobfish don't have scales - instead, they have loose, flabby skin.

With large black eyes, a large mouth, and a bulbous nose, the blobfish features a globulous head that makes up 40 percent of its body mass.

These deep-ocean swimmers have a single closed circulatory system.

They can reach more than two feet in length, although, on average, they are typically one-foot long.

Their reproduction rate is slow, as well as their growth and aging, and they could live up to 130 years. 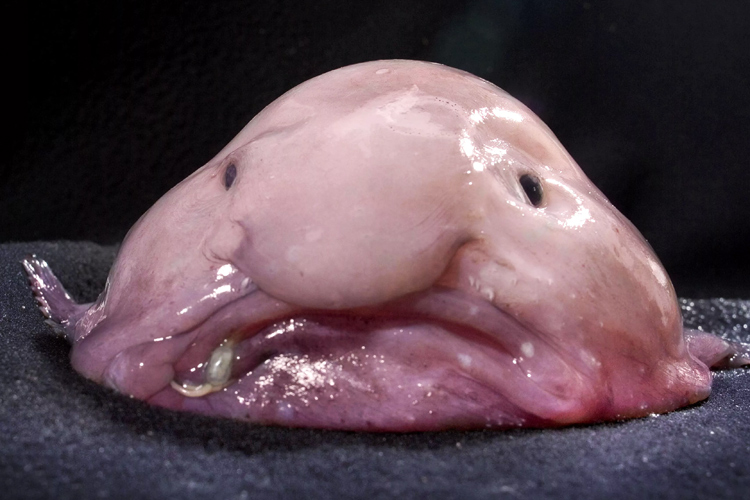 Females lay up to 100,000 eggs in a single nest in rocky areas, on top of deep ocean platforms with warmer water temperatures.

They hover over the eggs until they hatch.

A blobfish's diet includes crustaceans - including crabs, lobsters - but also sea urchins and mollusks. They sit on the bottom of the ocean and wait for prey to come into their mouth.

Read more about this amazing fish.