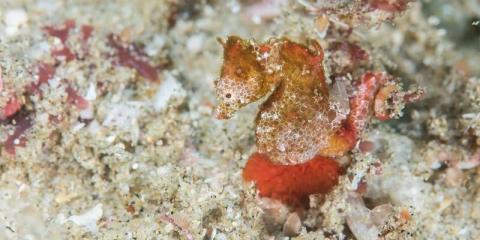 An international research team has discovered a new pygmy seahorse species in Sodwana Bay in South Africa, the first of its kind to be found in the waters around the continent.

Seahorses have sparked the imagination of people across time and cultures, but even in the strange world of pregnant fathers with grasping tails, pygmy seahorses stand out as peculiar. They are so incredibly tiny and well camouflaged that seven of the eight known species have only been discovered since the turn of the millennium.

At less than 2.7 centimeters, the largest pygmy seahorse is not much bigger than a fingernail, but most of the known species are smaller still. It comes as no surprise that finding these elusive creatures in the hustle and bustle of a coral reef is harder than finding a needle in a haystack.

This is, however, exactly what happened last year in the Sodwana Bay region, off South Africa's east coast. After a tip-off from a local diver, a team of researchers discovered the Sodwana pygmy seahorse. Read More